Engagement Bait: Don't use these 5 types

Okay, what the heck is Engagement Bait? In simple terms, engagement bait is “A tactic to create Facebook posts that provokes people into interacting, through likes, shares, comments, and other actions, in order to artificially boost engagement and get greater reach on News Feed.” They are “fluff” posts that don’t provide any value to you, your business, or the Facebook community. 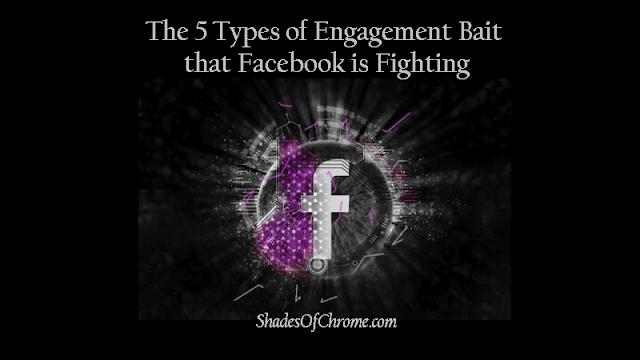 Facebook discovered that those types of posts are continuously being marked as spam and people no longer care for engagement bait posts. The Facebook community has seen this type of content a zillion times and are now basically bored and simply annoyed with it and Facebook has decided to share this information with you so that you can change your ways and post better quality content.

In order to stay visible and to give your audience what they want, you should stop posting the following five types of engagement bait posts on Facebook:

1. Comment Baiting: Facebook says, “Asking people to comment with specific answers (words, numbers, phrases, or emojis)” is engagement bait because it is spam in nature. People often feel that you are only asking them to comment so that you can increase your visibility on Facebook without providing any value in return and the Facebook community does not care to be used simply for your business’ gain.

2. Tag Baiting: Tagging is a Facebook feature that is meant to tag a person who is actually physically in the image or photo you are posting. It is not meant for tagging 50 of your friends on a post so that they can see it and comment. Asking people to tag their friends in the post message or in the comments is a huge No-No. Facebook is including these types of posts as engagement bait because of the negative feedback collected from users that were tagged and in no way connected to the content of the post.

3. React Baiting: The enhanced Facebook Reactions features were created for us as a way to portray how a post makes us feel but Facebook doesn’t want you to force people to comment with a specific reaction on a post. Keep the reactions out of your posts as Facebook wants people to use them as they were intended.

4. Vote Baiting: Having people vote using reactions, or by commenting or sharing will also be considered engagement bait posts. Facebook does not want you to bait people into voting using their reactions when the reaction doesn’t align with the voting subject so don’t use them in your images.

5. Share Baiting: Asking your friends and followers to share a post so they can win a contest or receive some type of reward is also considered engagement baiting. It’s perfectly fine to ask your audience to share content that is related to your business and provides value to further educate others but do not include any sort of giveaway in your Call to Action button.

In short, if you are using Facebook in an inauthentic way, such as encouraging followers to react, share, or comment simply to gain more exposure in the News Feed, your content will be seen less and less.

Business pages that repeatedly use this tactic will be demoted even more. If you ask a question that you don’t really care to know the answer to, and you’re just posting to get lots of quick comments to try and cheat the algorithm, do not post it. Facebook wants to build a better News Feed for everyone and their algorithm is now smart enough to spot those pointless posts a mile away.