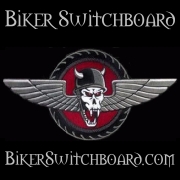 Biker Switchboard: Launched in 2010, Biker Switchboard is now a global media powerhouse ran by everyday folks that love ride to motorcycles. Their reach is over 1,000,000 through their many networks including Radio Broadcast, Podcast, Published Works and Video Creations.

Humble Beginnings
The Biker Switchboard was started in a small unused room just outside a garage in Indianapolis, Indiana by a few folks wrenching on their bikes, shooting the breeze and having a few cold ones. They were officially created on December 28th 2010 with a new twist on how bikers connect on the internet and wanted a website as a "go to area" for fellow bikers.

Lost Their 1st Potential Advertiser
Their 1st potential advertiser called that Summer and wanted to stop by and talk with them about placing an ad so they gave them the address not really thinking about it at the time. After about 40 minutes they called back and said "I think we took a wrong a turn, nothing but farm houses here" so they walked out of the garage and met them in the driveway.

They were not impressed that this was their headquarters....at the time they were working on a few bikes in the garage and several friends were there for a photo shoot using an old rustic shed as a backdrop. Needless to say, they did not land them because as they said "We were a rough looking bunch with long hair and tattoos" so they said "To hell with it" and went about their business.

Real Deal
But through it all folks, they are the real deal and they are not some large media company that decided to get on the Biker bandwagon and reel in your hard earned money. They all still ride, go to events, donate their time to helping our beloved Veterans and in fact still work out of a home office, but it is now spread over several areas of the house with Ethernet wires snaking from different rooms including the Kitchen and Garage. As none of them have any formal training in how networking sites work, they just pretty much started from scratch and went from there. Over the years they have made our share of mistakes, made tons of improvements and of course lost members.

Growth
In the summer of 2014, they filed the necessary paperwork and became an Limited Liability Corporation later that year. Since then, they have seen phenomenal growth with a true global reach in many countries. Their stand alone news site has been used as a reference on many occasions by the main stream media  in their news broadcast.