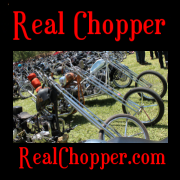 Real Chopper: We purchased this domain around 2011 before some bicycle site gobbled it up and made stupid use for such a good domain name. We held onto it for about a year or so, not know what to do with it.

Sometime in 2012, we created a Facebook page and hosted the domain on a separate page on Biker Switchboard where it slowly grew to around 5,000 likes in about a year.

We decided from the very beginning that we wanted the old style chopper motorcycles and not the new fashionable one on those television shows. In fact, the owner of this site rides an older style hardtail chopper. In our opinion and many others as well, those new so called choppers basically suck.

Now jump to now, it has a steady growing Facebook page and a stand alone site that receives visitors from all over the world. With a steady stream of submissions posted on it's Facebook page it has grown considerably.