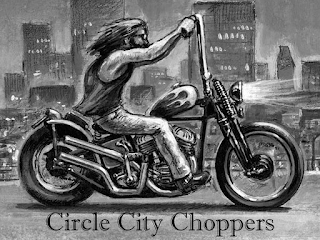 Their intent was to cash in on the chopper motorcycle craze enhanced by such shows a Orange County Choppers on the Discovery Channel.

As far as we know, they only built one motorcycle, known as the Indianapolis Colts Bike. This expansive hung of crap was on display for several years in Lucas Oil Stadium for several years.

That was then, this is now

The website went down, the domain expired and rights expired Not to let a cool domain go away, we bought it and are now bringing back proper. Enter Circle City Choppers, an Indianapolis, Indiana based Motorcycle Chopper Builder.

They specialize in the 50's to 70's style Chopper that has never went away. Their motorcycles are born lean and mean from the glory days of real choppers. These are hardcore, nibble, no frills bikes and are made to handle the back alleys and the streets of our city.

Their builders ride chops, have lived through the glory days of choppers and they live it in their daily lives. They build choppers using Harley, BSA and Triumph motorcycles only, no Japanese brands or Twin Cam crap.You can check out their website at CircleCityChoppers.com and follow them on Facebook on the link below.